Kanye West, famous rapper, who publicly proclaims his new Christian faith leading one of his “Sunday Services,” a creative and intensely musical re-imagining of a church service. 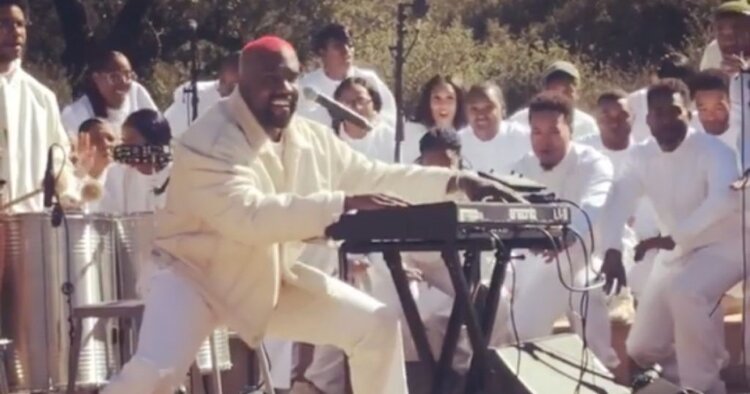 While the surrounding culture is on edge to the point that they “cancel” anyone who dares to make a point with which they disagree, we Christians are certainly much better than that, right? After all, we follow the “Come, let us reason together” God and the “Come as you are” God. We imitate the God of humble grace. So, we should be the last people to “cancel” anyone from church, from worship, from relationship, or even from a charitable respect…. Right?

Well, just like the elder brother in Luke 15, established Christians sometimes get a bit of pharisee mixed up in our hearts. We try to cancel the prodigal sons among us, so they’re not accepted in our Christian company. We find all sorts of very biblical or religious sounding excuses to look down on other people, even to question their Christianity on some basis other than the pure and simple Gospel. We have to watch that “elder brother” pharisee inside all of us seeking to sulk and criticize the welcoming of the prodigal son when he returns home. We’re quick to question the sincerity of the prodigal son. Maybe, we’ve become just jaded enough to ask just how long this newfound repentance will last before he falls away again. We have to remember, “Jesus saved me, the chief of sinners,” so He can save anybody. Yeah, there will always be people who start to follow Jesus and turn away, but our Jesus-centered path does not lead us to become another hardened part of our cancel culture. Instead, “Love always hopes” (1 Corinthians 13:7). So, we, too, should be marked with hope in Jesus for people. In this hope and love, we should lead the way out of our surrounding “cancel culture.”

The Case of Kanye West

Kanye is pronounced like “con” and “yay,” for those unfamiliar with him. If you are unfamiliar, you may have been in a Christian bubble, because Kanye is a rap, hip-hop, music, fashion, and pop-culture superstar. Kanye has been, like most pop-culture superstars, involved with the pursuit of money and fame, substance abuse, sexual promiscuity, and on top of all that has been outright blasphemous toward God. He went so far as to declare himself to be God. He also posed as Jesus for the cover of Rolling Stone magazine. Of course, he also wrote songs with titles like “Jesus Walks” that began to be kind to the Messiah, but then he turned around and slurred God through much of the album. Kanye was no friend to Christianity.

But then…, last year something happened. Kanye experienced some turmoil in life, combined with having a lot of Christian people around at just the right time. Kanye West proclaimed that he became a Christian. Not only that, Kanye said that he wanted to do Gospel albums and become a missionary for Christ. In his first public statements in October after his conversion, he emphasized not just his new Christianity, but the absolute necessity in the Christian walk for repentance. Kanye said that he was a changed man, and was going to continue being changed.

Kanye did quickly publish a Gospel album called “Jesus is King.” He also started putting on his now famous “Sunday Services.” Every Sunday he pulls together a massive choir and band to perform weekly worship experiences that include original numbers and arrangements, choreography, lighting and stage-art worthy of Kanye’s old secular showmanship that is truly world class.

Still, quite a few Christian onlookers began to criticize Kanye, to treat him with distrust, disdain, distaste, and sometimes they treated him as an absolute enemy. They criticized the new Christian for everything from his non-traditional approach to worship, to his connections with prosperity gospel teachers. They claimed he was just doing the Christian thing for the publicity. Some denounced him for his relationship with President Trump, called him a racist, and found every reason for suspicion and anger possible. Besides all this, the general feeling in Christian churches has been, “This is Kanye West. You know it’s not going to last.”

Kanye even wrote a song about his experience with Christians as he began following Christ. The song was called “Hands On.” I highly recommend reading through all the lyrics . The song was not complimentary. Here’s a sample of the lyrics:

Christians, we need to hear this. I’m going to admit that I can’t judge anyone’s heart. I’m also going to say openly that I do not agree with the theology of some of the people around Kanye. That’s ok. New followers of Christ are like babies, who will grow through the power of Christ to become mature followers. We shouldn’t expect new believers to act like they’ve been Christian for a lifetime. While Christian lifestyle is important, I, personally, didn’t even know some of the ways I was supposed to live as a Christian for years, and it took even longer to learn to walk in those Christian patterns of life. While doctrine is certainly important, when I first came to Christ, it took me a good long while to understand and embrace many important doctrines, but somehow the driving truth that Jesus died for me pushed me to pursue Jesus, through his Bible with his people. Thankfully his people didn’t write me off or “cancel” me. I still have not arrived at perfection, nor has any Christian, but we have to be patient with one another as we grow. This is the way the Great Commission works! People are messy. Together we pursue Christ. Slowly but surely, He makes rights out of our wrongs, begins to clean up the messes we make of our lives, and removes the dirt that infects our churches.

We cannot be a skeptical people as Christians, but we can be kind to the skeptics. We cannot be a judgmental or Pharisaical people as Christians, but we can treat even the pharisees in our church with grace. We cannot cancel Kanye. We cannot sneer and express disbelief that the God of all power and might, our God of the cross, can’t or won’t save the Kanyes among us. Church leaders need to receive new believers, make sure they understand the Gospel and the call to take up our cross to follow Jesus; but then all of us need to take the professing Kanyes that come to us, and pray hard for them. Pray for their growth. Pray that God will root and sustain their faith. Pray that God will use them, and then be sensitive to how God wants to use them, even right now as a new believer! Let’s not write Kanye off. Let’s pray for Kanye. Let’s fight for his good in Christ, and let’s do the same for anyone that we may otherwise be tempted to be skeptical about. Let’s be a people of hope and trust in our change-agent God, who died to make us more like him as we draw near to him.

Christians, let us lead the way out of this cancel culture environment. Let us be a light for loving and respecting people despite any differences between us. Now, I think I’ll go enjoy one of Kanye’s Sunday Services on YouTube. I’ll trust that God can help me to discern between God’s Truth and any falsehood, through His Word, but I’ll also enjoy the move of the Spirit of God in my heart as I rejoice at the new life God is creating, even right in front of the eyes of a watching world!

Pastor Kevin Rutledge is the Lead Teaching Pastor at First. He has a Bachelor’s in Biblical Studies, an MA in Theology, and over twenty years of ministry experience.